Flooding – Past and Present

This week both the UK and Venice have had to battle against floodwaters, whilst here in Cambridge our own river faces the opposite problem, despite the heavy rain.

Although we haven’t seen major flooding in Cambridgeshire for a little while now, it was a huge historical problem. Sitting upon flat country, on the edge of the fens, with a river that was largely tidal until the 1700’s, meant riparian colleges would often lose their ground floors to flood events.

As passengers on our guided punt tours will know, there are many flood markers on the bridges of the river Cam, showing the high points of the waters. What may won’t see is that some colleges have markers hidden inside their courtyards, showing waist-deep water. Indeed, one of the reasons the Wren library at Trinity College was placed on the first floor rather than the ground, was to keep the valuable books above the potential water-line.

Whilst we aren’t expecting any floods like that soon, it is heartening to know that our industry is uniquely fortified against them. In fact punts were even used to help rescue locals during flooding in the Cambridgeshire town of St Neots. 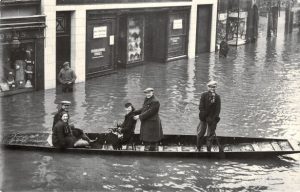